The mission of Olmsted County Parks is to foster an appreciation of the natural world through environmental education, natural resource management, and public participation in the stewardship of our park lands.

View RPU restrictions for no wake zones on Lake Zumbro 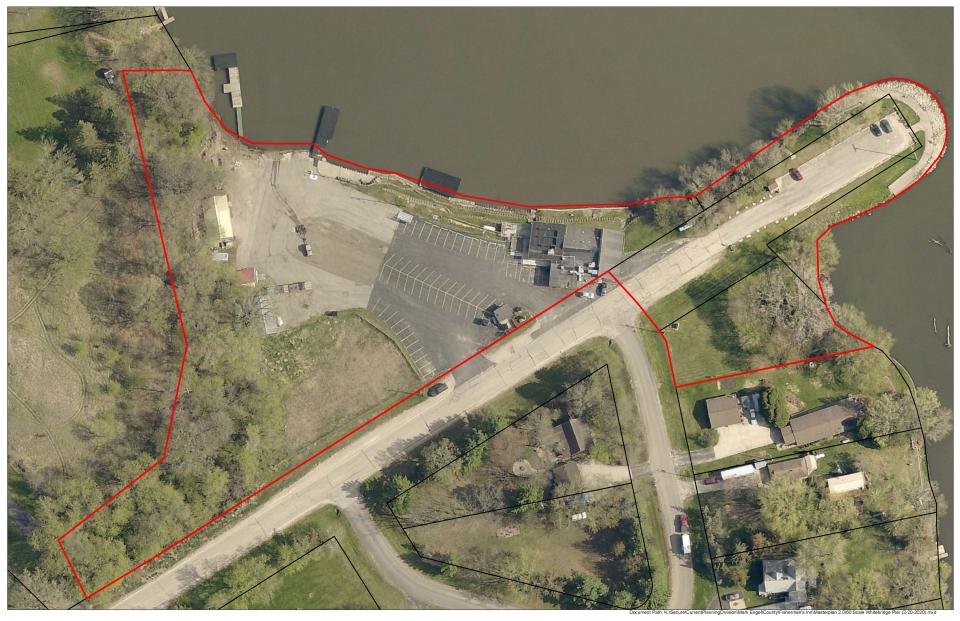 The site underwent its first major change in 1918 when White Bridge was moved from North Mankato to the site. Originating as a major crossing point for Lake Zumbro, the White Bridge once spanned the lake in this location. This bridge promoted economic growth in the area and businesses began opening along the road in the early 1930's to benefit from the lake activity. The site changed in 1972 when a car driving over the bridge ran into a major support structure causing half of the bridge to fall into the lake. To restore the broken traffic circulation, the Army Corp of Engineers built a temporary bridge and began designing the current Sandy Point Bridge further upstream. After the Sandy Point Bridge was completed in the late 1970's, the temporary bridge was removed, leaving a dead-end road. This provided an opportunity for Olmsted County to develop White Bridge Fishing Pier, an ADA accessible pier, named after the former bridge structure.

The removal of the bridge resulted in a shift to mostly residential with the Fisherman's Inn being the only restaurant on the west side of the Lake Zumbro. In 2019, the timing was right for the owners of Fisherman's Inn to retire and sell the restaurant and boat launch to Olmsted County. Expanding this park and acquiring a well-established boat launch allowed the county to open the only public boat launch within Olmsted County on Lake Zumbro in the spring of 2020. The two-lane boat launch will be managed in coordination with the Department of Natural Resources and provides a much-needed lake recreation amenity. This coordinated well with the 2019 dredging of the lake which subsequently increased public awareness and water recreation on Lake Zumbro.

The new 2.9-acre addition to the park has increased the recreational opportunities offered to the public. To emphasize the expansion, Parks' staff worked with the Olmsted County Parks Commission to develop a new name for the park. In 2020 the 4-acre park was renamed Lake Zumbro Park. As the water quality of the lake improves and the Parks Department continues to make updates, the park will become a more attractive destination, encouraging greater investments to be made on the site.

The site has a motorized boat launch, picnicking, and fishing piers. It is designed to be ADA accessible so that everyone has an opportunity to enjoy Lake Zumbro. The fishing pier was created by converting the former road into a small parking lot with a port-a-potty inside a small structure adjacent. The shore edge is large stone riprap to give increased stability against erosion. There are two overlooks on either side of the peninsula consisting of 25-foot-long wooden structures with handrails. To the south of the peninsula is a former beach, degraded over time, and a grassy area with picnic tables and fire pits.

On the east edge of the peninsula where the bridge was located, sits an informational sign that welcomes visitors along with rules and regulations, lake maps and fishing information. There is an existing power line that goes across the lake with a large orange sphere on the line going over the lake to alert boaters to be careful near the wires. Another power line crosses the parking lot of the boat ramp. Power poles are in both locations of the existing power lines.

The boat launch was privately owned and operated for many years. Upon acquisition of the new property, docks were placed at the launch to provide for a 2-lane public boat launch. The public launch is a combined effort between Olmsted County Parks and MN Department of Natural Resources. All structures from the former Fisherman's Inn property were removed to provide additional land space and a clean slate for future plans.